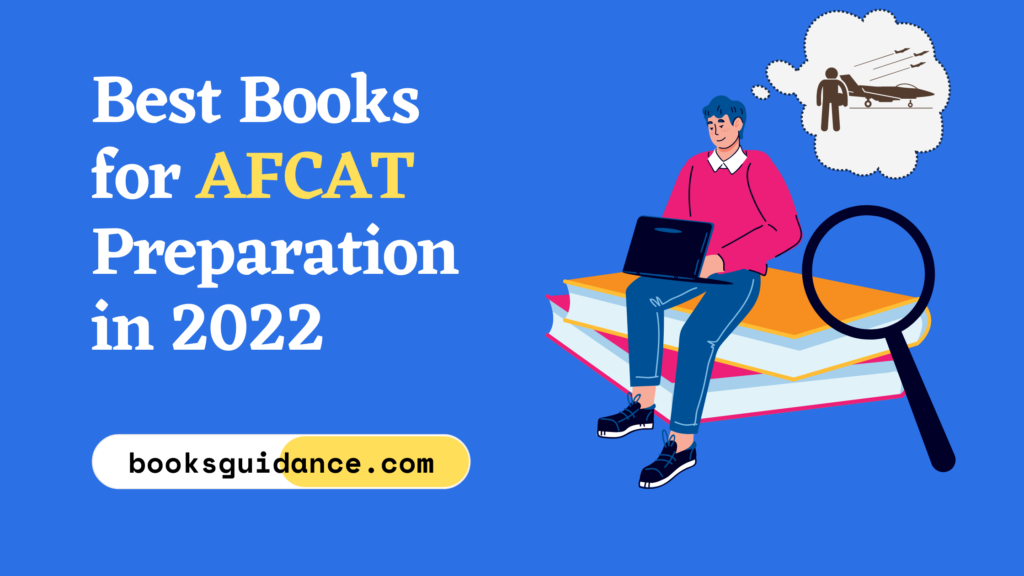 Best Books for AFCAT Preparation in 2022: The (AFCAT) Air Force Common Admission Test is an admission test for applicants interested in joining the Indian Air Force.

The test is held twice a year. Candidates must read certain standard books to cover the whole course. Important factors to crack,  AFCAT 2022 is just like any other test The right study material for preparation. Every year, a lot of individuals apply to take the exam.

While studying for the test, candidates prefer to read one book written in a simple comprehensive language rather than a wide collection of books written in a high degree of difficult language.

Candidates should also focus on selecting a book that offers practice questions once each concept/chapter is completed. The practice paper at the end of the book is really useful for giving practice for the candidate.

Here are some major books that have been well-known for AFCAT  2022 test preparation over the previous few years, and will undoubtedly offer you an advantage in your preparations and help in better results.

How to select the Best Books for AFCAT Preparation in 2022

choosing the appropriate book for AFCAT preparation is an important aspect of effective preparation.

Subject matter experts and toppers suggest studying the AFCAT reference books after understanding the concepts of the core syllabus.

When choosing relevant AFCAT books, students must keep a few factors in mind in order to study properly for AFCAT 2022.

Candidates should consider the following factors when selecting the Best Books for AFCAT Preparation in 2022.

Best Books for AFCAT Preparation in 2022

AFCAT is a tough exam and books and guides play a major role in helping you. You should find the most relevant books that will help you learn everything you need for this exam.

The most important aspect of AFCAT preparation is the selection of relevant books. Every AFCAT aspirant’s first aim is to find the correct combination of AFCAT preparing books.

There are so many books on the market but deciding which ones are the best might be difficult. Unlike other entrance tests, AFCAT has its own set of books written just for it.

For your Guidance, I’ve created a list of the Best Books for AFCAT Preparation in 2022, organised by subject and overall preparation.

Lucent General Knowledge includes all aspects of  general knowledge. Lucent GK is recommended by a number of expert teachers and coaching institutes as the finest book for all competitive examinations.

Every topic in this book is discussed in depth and to the point. The facts are presented in a point-by-point format rather than in a literary manner, and the language is straightforward.

It also includes some current events in addition to general knowledge. For the GK Section, anyone studying for the SSC or AFCAT  Exam can blindly follow this book.

While If you just have a limited amount of time, go for the lucent book, which only has objective questions, because the questions are repetitive, and this is the ideal technique for scoring well in the general awareness portion.

This book has gained a reputation as one of the market leaders in the topic over the last 20 years, and it has helped you perform well on the General English paper of most competitive examinations.

With the passing years and in order to stay up with current trends in test papers, this book provides a Question Bank including questions from previous competitive examinations.

Additionally, this book includes a few full-length examination papers with answers to provide you first-hand experience.

You could be tempted to think that competitive tests have their own set of rules and question types.

As a result, among students and candidates taking a variety of competitive exams, Quantitative Aptitude has earned a distinct place of respect and acceptability.

The book Quantitative Aptitude for Competitive Examination is the best book to use when studying for competitive exams. It contains material that is extremely detailed and precise.

The book also includes a large number of practice questions to assist students to understand the topics and developing confidence in their preparation.

Therefor , the book is a fantastic study resource for preparing for competitive exams such as SSC CGL, Bank PO, SBI-PO, IBPS, RBI exam, MBA, MAT, CAT, IIFT, IGNOU, and others.

Highlights of the Quantitative Aptitude  book

This is one of the most widely read textbooks on the subject of reasoning.
This book will be a valuable resource for you if you are attempting to pass government examinations such as the SSC, AFCAT, and others.

There are parts on both verbal and nonverbal reasoning in this book.

Additionally, past year’s problems and detailed explanations are provided to assist students in learning the topic.

With Test Papers for Verbal and Non-Verbal Reasoning, it will assist you in increasing your knowledge.

Those preparing for competitive exams or those getting ready to take exams for government jobs will benefit from this book. The reasoning portion of the book is covered in detail.

Highlights of this Reasoning Book

Presenting the “AFCAT Common Admission Test Book” in its revised and updated form, which is totally prepared according to the required syllabus.

This book is organized into four sections to provide detailed coverage of the syllabus. Each chapter is accompanied not just by “Theory Notes,” but also by MCQs to ensure that the topics are learned quickly.

Each chapter is supported by previous years’ AFCAT Questions to gain an understanding of the pattern and question weightage.

The book is a superb study material to expect successful moving to the final exam because it includes the entire syllabus with solved papers and online practice sets.

Highlights  of the AFCAT book by Arihant 2022

This complete book is designed specifically for AFCAT (Air Force Common Admission Test) applicants in the Flying and Technical Branch.

This book contains Study Material as well as Previous Years Papers (Solved) for practicing questions based on the most recent examination pattern.

For candidates’ better understanding, detailed explanatory answers have been given for the selected questions.

There are four major sections in this book. Section I covers the fundamentals of the Indian Air Force’s flying and technical branches.

Highlights  of the AFCAT Master Guide Book by R. Gupta

The Verbal Ability in English segment also covers the Cloze Test, which was asked in the previous test, and includes detailed theory, completed examples, and problem-solving shortcuts.

The Verbal and Nonverbal Reasoning sections, as well as spatial abilities, rotated blocks, and hidden figures, are all included in the Reasoning and Military Aptitude part.

Highlights  of the Study Guide for AFCAT by Disha Experts

My Final Thoughts About the Best AFCAT Preparation Books in 2022

After reading this post, it is clear that you must be familiar with all of the subjects, and that these subjects are of equal importance.

As a result, get your hands on the recommended AFCAT books to help you prepare for the AFCAT exam.

I hope you enjoyed my article on the Best Books for AFCAT Preparation in 2022.

Please leave a comment below if you have any suggestions or feedback, and I will try my best to answer your questions.

If you agree with my opinion, I’ll give you a link to the book at its lowest price on Amazon.

Disclaimer This review is purely based on author personal experience. You may agree or disagree with the review parameters and content mentioned in the post. Images are used are for the demonstration purpose only and may or may not belongs to the intellectual property of booksguidance. And buy now link will lead to the Amazon as the author of this post is associated with amazon affiliate program.